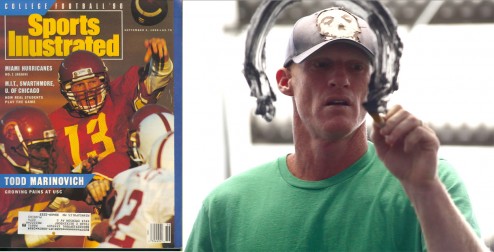 A famous NFL flameout finds himself at ease these days at the easel, of all places

“Todd Marinovich was born to be a quarterback—he would grow to be 6’4″ and a lithe 215 pounds, with a fluid lefthanded throwing motion. He was bred to be one too—his father, Marv, stretching his son’s infant hamstrings, teething him on iron-rich frozen liver and then feeding him a strict diet of natural foods and Eastern bloc exercises. The boy nicknamed Robo QB went to USC and became the Raiders’ first-round draft pick in 1991. But, as Todd asks in The Marinovich Project, the superbly nuanced ESPN documentary about his rise and fall that premiered in December, “If you’re good at something, does that mean you’re meant to do it?”